Two years ago my wife Maureen and I made a five day trip into David Lake by Bell Lake in Killarney Provincial Park. After carrying over the first portage with our canoe and gear we took an extended break. This was Maureen’s first trip out since before the kids were born. That is going back at least thirty years now. I spotted Silver Peak to my left. There was a piece of narrow swamp leading my eye to Silver Peak. So I thought this might be interesting. Keeping some shoreline on the left to lead the eye to the swamp which you then follow up to Silver Peak. Silver Peak is the highest elevation in the La Cloche Mountain Range. It rises to a height of 1782 feet. Silver Peak is a very popular destination for hikers to take in the view from the top.

I have just completed a softcover book through Blurb. There is also an ebook available as well. Check them out here.

Well that is it for this week. Thank you for stopping by. Until next time happy trails.

Monday morning at 6:00 a.m. we loaded our Ford Explorer and head for Killarney Provincial Park.This was my wife Maureen’s first canoeing trip in 34 years.We were going into the Park for 5 days for an extended stay on David Lake. I have been looking forward to this trip for some time.We arrived at our destination Bell Lake, our jump off point.It was a beautiful morning with very calm water.We proceeded to load all of our gear into the canoe and were soon ready to launch.

We made good progress t to the first portage.Maureen and I carried our packs over the 745 m portage with a return trip to bring up the canoe.By this time Maureen was a little sore so we took a break before loading the canoe and moving on.After a short rest enjoying the scenery we head to the next portage of 200 m. Where upon we moved our gear over to David Lake.The wind was relatively calm making for excellent canoeing and we soon arrived at our campsite.Once camp was set up we proceeded to boil up a nice cup of coffee with a sandwich.

The conditions were not much good that evening for photographing as the wind never let up.At this time of year the temperature will drop by nightfall and become quite cool.With a warm fire going and a mug of hot chocolate in our hands it was a cosy evening.Maureen was stiff and sore by now but happy to be here.It was not long before we were both tired and ready for bed.

I awoke about 4 a.m. to heavy rain pounding on our tent along with thunder and lighting.The storm passed over rather quickly.We both rolled over and went back to sleep.I got up around 6 a.m. and quickly went back to bed as the wind was blowing fast moving cloud cover with a coolness in the air.

Tuesday turned out to be not a good day in terms of photographing.It was a cold windy day with heavy cloud coverWe had each brought a book with us to help pass the day.Maureen and I did a bit of canoeing that evening exploring along the lake shore.At this time of year it gets dark early.For us that meant early to bed and early to rise.

Wednesday morning dawned and I grabbed my photo equipment to see what I could come up with.There was still a slight breeze rippling the water but I managed to get the above shot.At this time of year there is mist on the water along with some fall colors.I believe that full fall color will not happen for another week.This area that I photographed is one of my favourite locations.I had about 15 minutes to shot and made the most of it.

That is it for now. I want to thank everyone for there nice comments it is much appreciated as I enjoy sharing my experiences and photos with everyone.I also would like to take this opportunity to say that my wife was doing great on this trip and has come through like a real trooper.So until next time happy trails.

Saturday morning we continued exploring David Lake looking for the various campsites and decided that we would camp back at the upper end of the lake.Returning to our campsite we began packing our gear when three canoes rounded the point in front of the campsite.I hailed the gentlemen,asking if they would like our campsite for the night.They thanked us  and came a shore. We had a pleasant chat while loading up the camp equipment.These six gentleman were all from Southern Ontario on their yearly canoe trip.Guys the photo in the first post is where you campsite was.

So far we had been lucky with the weather,but that was about to change.We had paddled about half way up the lake when the rains started.It literally poured.Upon our arrival at the chosen campsite we quickly set up camp and crawled into the tent soaking wet.It was a miserable afternoon with heavy downpours along with thunder and lightning all around us.To make matters worse Maryjean’s tent had some bad leaks.

By evening the storm let up, allowing us to get a fire going. Everything that was wet we laid  out to dry by the fire.A nice hot supper and cup of tea sure hit the spot.

The next morning didn’t bring much in the way of photographing.We had a leisure breakfast as the skies cleared up.Once all was packed we started our journey home.It was an uneventful trip back out.We met folks coming in and ran into the six gentleman whom we had meet the day before.We finally returned to Killarney Kanoe on Bell Lake .It is always with regret that as we loaded the vehicle up for the drive home that it is sad to have to leave this beautiful Park.But at the same time we are looking forward to our next trip in. 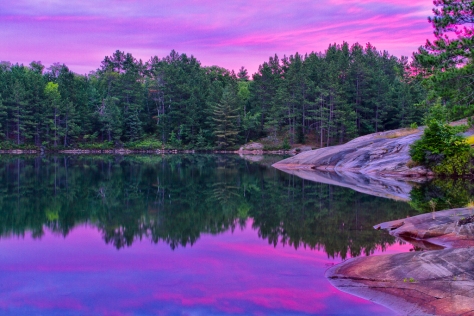 Three of us embarked Thursday on a four day canoe trip into David Lake in Killarney Provincial Park.The party consisted of my daughter Maryjean and my grandson Coye,plus myself. We loaded up the Quebeco 17 canoe at Bell Lake.I opted to portage out of Bell Lake as oppose to hiking through the Clearsilver Lake area by way of Johnny Lake.

We arrived at the first portage where we met a couple and there teenage daughter and son.They were on there way home. We had a pleasant chat with these folks before hauling our gear and canoe over the 745 meter portage.

When Maryjean went back up the portage to retrieve some remaining gear she discovered that one of the sleeping bags had rolled down into the lake. Stripping she swam out and rescued the sleeping bag.When she met up with me I was informed of the incidence and we had a good laugh.

Before moving on we had some bannock that I had made up the day previous.Great for chewing on.Pushing off we paddled up this swamp lake towards the next portage.This portage was short,only 200 meters.There was a small waterfalls just off the trail so we went and had a look.

Upon entering David Lake we were faced with a good headwind.We did okay paddling up the lake.We located a nice sheltered campsite.Once we got the campsite set up a break was in order with a nice hot cup of coffee.

While we enjoyed a supper of baked rice and chicken breast a Common Merganser Hen with nine half grown babies were observed in a shallow cove by the campsite.They were splashing and diving in the shallows.

By now it was six p.m. and the wind was not calming down.Launching the canoe we headed out to explore the lake.As we paddled, I sighted the mergansers on a flat rock with her brood settled in for the night.The bottom end of David Lake consists of a large number of islands and many rocky points.As twilight approached we built up a fire where by we roasted hotdogs and had hot chocolate before turning in.There is something to be said about a wilderness setting at twilight as you sit by the water overlooking the lake. Off in the distance you hear the lonesome call of the loons as the night settles in.

The above shot was taken the next morning at daybreak.It always amazes me how these type of rocks look early in the morning or evening.Throw in the bonus color in the sky and you get a very rewarding photo.

The recipe that I used for bannock is as follows.

You then add raisins and nuts.

I also add what ever fruit is available.

Mix all this together and add water or milk.

Cook in a frying pan or wrap around a stick and hold over the fire.

I awoke at 5:30 am the next morning.Nudging Maryjean awake I crawled out of the tent.There was cloud cover this morning but the waters were fairly calm.Towards the far shore the wind was rippling the water slightly.It was one of those mornings when you had to be patient and wait.

The above photo was the result of waiting for the right moment.I find that daybreak produces much cooler temperatures than evening.You need to wait for the sun to appear before the warm colors show.Once the sun starts peeping over the horizon you get light beams here and there filtering through the trees. This is what enhances your photos. the island and point on Ruth Roy also helps create a pleasing panoramic.There was cloud cover that morning to enhance the photo with a pinkish glow in the sky.

As morning progressed the wind picked up and the lighting became too intense, it was time to put the coffee pot on.Maryjean had been busy doing her own photographing with tips from Dad.We both sat back to enjoy breakfast and a fresh cup of coffee.Mornings are special for the tranquility and peacefulness that can be had in a wilderness setting.

By mid morning it was time to pack up and load the canoe. Maryjean and I launched the canoe and were soon at the portage to Johnny Lake. On arrival to Johnny Lake we leisurely paddled along the shore line back to Bell Lake. We noticed that a lot of campers were packing up and loading there canoes.

MJ and I paddled into shore for a bite to eat and as we were not in a big hurry to explore forpossible photos with Silver Peak in the background.But that would have to be another day.We also photographed one another on the shore with Silver Peak in the background.While we were doing this,the campers we had seen packing up came gliding past us.After exchanging hellos they were soon gone around the point.

We eased the canoe back into the water and made our way back to Bell Lake.We hauled our equipment up to the truck.I returned the canoe back to Killarney Kanoes and it was time to head home.This was a great trip with my daughter.The weather was good and we both hated to leave.

I will be going on a four day canoe trip next week into David Lake with my daughter so I hope to have more photos for you to view.Until then happy trails.