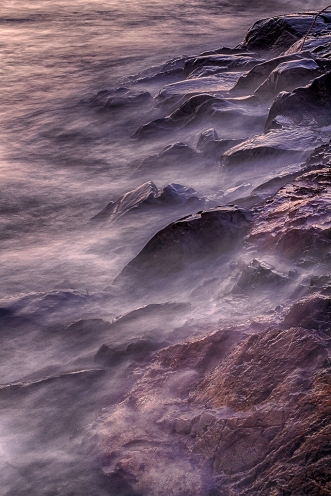 As I walked the shoreline of Lake Superior at Pukaskwa National Park late one evening, I envisioned the scene above. It was a late evening with poor lighting. The photographing had not been great. There was some wave action upon the rocks. I came to a sloping rocky shoreline with jagged rocks. The color varied from black to golden brown in color. So I decided to set up my tripod and Canon EOS 7D and see what I could come up with. Shooting tight and set up low I was able to get the above scene. The shutter speed  was set to 8 sec and to get the depth of field that I needed at this range, my f-stops was at f22. This is a nice soft and moody composition.

By waiting for the right amount of wave action I was able to get that capture, I was looking for. By shooting at 8 sec. I was able to create a moody scene where by the water now appears misty like among the rocks. The transition from water to rocks is smooth. By smoothing out the many body of water and getting the right lighting and shadows on the rocks I find this to be a very nice scene that will give you a soothing effect. The other way around would be having the waves crashing upon the rocks at a faster shutter speed.

Well that is it for now. Thank you for stopping by. Until next time happy trails.