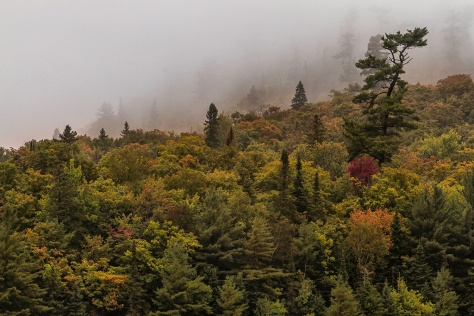 An interesting morning shot taken on the Montreal River just off Hwy 17. A combination of mist, color and the darker evergreens makes for interesting contrast.

I opened the door

To my hotel room

I am all alone

No one to love

I don’t know when

The last time I was kissed

Even hugged, for that matter

I am stuck here

In this hotel room

Sipping on my beer

I hang my head

In that hotel room

I have asked myself

I don’t know how many times

As to what went wrong

I am now all alone

Without you at my side

It hurts to say

That you are gone

The following morning after my evening photographing, I returned to the Montreal River. This time it was at dawn. The river was thick with mist. The morning temperature at my campsite in Sawpit Bay, Lake Superior was 12 Celsius. On my arrival at the Montreal River the temperature was 5 Celsius. The distance between the two locations was only 40 Kilometers. I set up at the same location from the previous evening. It was a matter of waiting for the right lighting. Waiting for the fog to lift was a factor. The fog helped eliminate all that blue sky with no clouds. It was a nice setup watching the morning evolve. The crispness of the morning air felt good. It was a fall feeling.

The temperatures are beginning to drop here. Maybe the colors of fall will come on. Fall is the time of year when the air is cool and crisp. The beauty of the land is before you in a spectrum of color.

The fall colors up here in northern Ontario are late this year.  I arrived at Sawpit Bay, Lake Superior, late afternoon on September 16. Sawpit Bay has a number of campsites on crown land that are free. It was not long before the campsite was set up, supper started to the sound of waves crashing upon the beach. One of my goals was to explore the Montreal River up the highway.

The Montreal River is a large river with a number of large dams at various locations going inland. Windmills have been going up at a steady pace, thus the need for more and more roads in the back country.  This creates more opportunities for photographing.Therefore I was able to explore along the river where ever I could. The first two days were lost due to rain and one thunderstorm overnight Strong winds prevailed. It was not till the evening of the September 21 that I was able to capture any decent photographic work.

The above photo was at a location that I discovered on the Montreal River. I had previously found this location early in my trip by driving a short piece off the main gravel road  down to the river’s edge. It turned out to be a nice campsite with a good place to put a boat in. The wind had finally gone quiet after six days. The river here was like a piece of grass. To finally get to capture a photo.

Well that is it for this week. Thank you everyone for stopping by. So until next time, happy trails.