On my trip to Cave Lake I had hiked there on my own. I spent the night in my tent alone. It actually went better than I expected. A person seems to develop acute hearing during the night and I am deaf. You can start hearing sounds that are real or imaginary. But all in all I survived the night. I woke up to a beautiful morning with the local black fly population waiting for me. They were thick.

Walking along the shoreline I came across this small rock point jutting out into the lake. There were no clouds in the sky as per usual. I set up my tripod and Canon 7D to place the rock point to the right in my composition. By chosen to have the rock point angled to the center of my composition you can get more of a 3D  effect in your work. It also allowed me to eliminate some of the lake surface.  I showed just a touch of shoreline in the foreground bottom right. There were some small rocks and grass there. The small rocks allowed for a comparison of boulder size in relationship to the rock point. There is a lot of detail in the rock structures to be found. The reflections allow for an almost 3D effect of the rock point. There is a piece of broken wood on the rock edge for added interest. The green vegetation breaks up the rock color for a better appeal.

I was able to have the far treeline angle down into the center of the composition from the top left. I kept the sky to a minimum here. You can notice the fresh green of the Maples among the evergreens. You get this effect well into June. This gives you various shades of green for better contrast. One of the things you have to be aware of is that you have to disturb the blackflies in front of your lense. If not you can get a nice looking blurry spot on your photo.

Well that is all for now. So until next time happy trails. 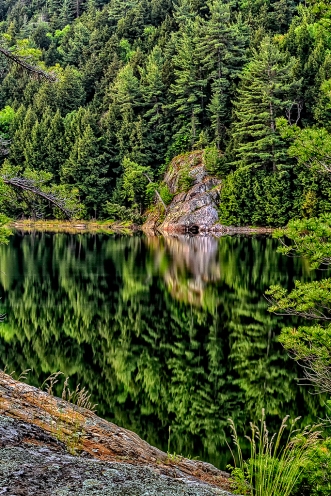 The above scene was taken at Cave Lake, Killarney Provincial Park. This was the only trip I had made so far. It requires about a 2 hour hike to reach with two campsites available. I hiked here in June of 2012. The bugs were very bad. Mosquitoes on the rampage in the evening, then dawn I was assaulted by Blackflies. This is not a big lake. The East shoreline is completely forest covered. It appears to be fairly good incline from the top of the La Cloche Range to Cave Lakes water edge. But there is a small section of rock protruding among the evergreens down to the water’s edge. The neat thing about it was that when the lake’s surface calmed, you would swear there was a cave at the base.

This was a dawn shot that I composed. I put some rock surface in the foreground to eliminate so of the water and to add depth. There is some green vegetation in the bottom right corner. Very nice detail of lichen on the rock surface. At this time of year everything is fresh looking. There are some Pine boughs along the edges to add more depth. I wanted to create the feeling that you are standing on that rock and looking towards that hole in the rock on the far shore. With the dense forest across the way there is a combination of low morning like striking the evergreens plus the lighter green of new growth. This will give you beautiful contrast and effect. Plus this is all reflected into the water. 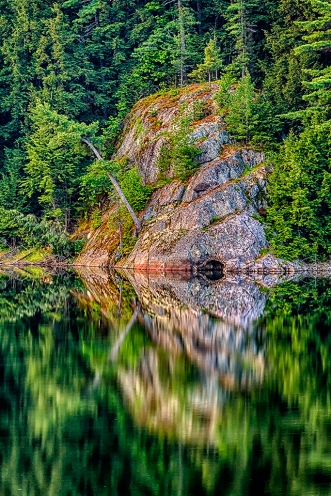 I created a close up shot of that rock structure and was rewarded with the tiered effect going diagonally to the water. An interesting bent Pine is growing on the bottom part of the ridge. Now we can get a better view of the cave effect. Again utilizing the low early morning light and new growth for contrast and break up the all green effect.

Well that is it for this time. So until next time happy trails

The Monday past I stopped in at the Killarney Provincial Park office to book a campsite at Topaz Lake.My partner was sick, so seeing that I was already packed and ready to go I decided to venture alone.It is about a four hour hike to Topaz Lake. I had full gear and did not know what kind of shape I was in.I picked up the trail at the South end of George Lake and proceeded to hike into the interior.This is a well used and defined trail.

Paul Smith and I had previously hiked into Lumsden Lake so I was familiar with this part of the trail.It was a hot day around 28 C and the bugs were about.The going was pretty good so far and in a short while I came upon Acid Lake.The hiking trail traversed around the lake for a distance before heading North.

Acid Lake is a pretty lake and I will camp here in the future.The backdrop of the La Cloche Mountains coming down to the far shore line is pleasing.As I was resting on the rocks along the shoreline a pair of Loons came to investigate me.The Loons must have a nest here somewhere.

I was now starting to feel the effects of the heat and the weight of my pack as I hiked along the trail.The trail was getting more rugged with more and more up and downs.My legs were also starting to feel like rubber.The biggest problem was that I was not in shape for doing this type of hiking.I hiked for another hour and finally came to the conclusion that I was not going to make it to Topaz Lake.I checked my GPS and noted that Cave Lake was just ahead.I figured that I had better stop off here and pitch the tent.I still had another hour of walking and I new that was too far.It would have to wait another day.

I followed the signs into Cave Lake.This trail had fallen trees on it so there were a couple detours to be taken here.When I arrive at Cave Lake I immediately set up the tent and crawled inside to have a nap.After a short rest I explored my surrounding I was quite surprised at what was around me.There would be photo opportunities here.There was a island at the bottom end of the lake.The La Cloche mountains came down to the shoreline heavy covered with forest.There was a sparse showing of white rock to be seen.At the East end of the lake was some rock formations that looked good.It was at the West end that there was large rock formations that appear in the above panoramic. I set up the stove and boiled water for tea and heated my supper.There is something about being in a place like this sitting on a rock overlooking a wilderness lake.It is a great feeling.

The evening shooting was not good as the wind was not co-operating very well and the blackflies were bad.I returned to the tent and had a peaceful sleep that night.I awoke about five the next morning and was able to get a number of shots.I must tell you I was feeling the effects of yesterday as my legs were stiff and sore.

The above panoramic was taken that morning.It consists of three overlapping photos.I created depth by placing the foreground to the right and leading the eye into the depth of the lake with the placement of the island.The island was now lit by the morning sun.I set the zoom to 85 mm and the shutter speed was 2.5 sec @f22

By seven I had everything packed and ready to go.The misquitoes were bad that morning and I wanted to get out early while it was still cool.I also realized that there would be a lot of  uphill walking to Acid Lake. An hour later I came to Acid Lake where I took a half hour break.I was already feeling the physical effects from yesterday.Once again the loons appeared to check me out.

I was back at the truck by ten that morning.My legs were pretty stiff and sore though.All in all it was a pretty good little adventure and I enjoyed myself immensely.I just need to get in better shape.So until next time happy trails.