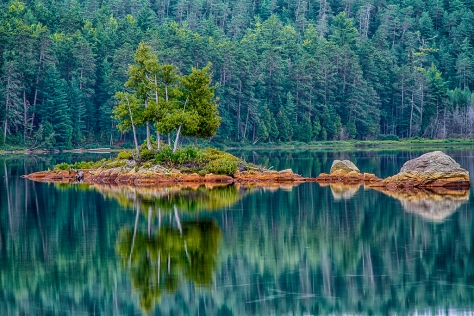 With breakfast over and drinking tea made with blueberry leaves and a couple cut up strawberries, the canoe was soon gliding over the calm waters. We headed towards the landing. Tim and I had decided the evening before to haul the canoe over into Dewdney Lake for some bass fishing. I walked to the truck for our fishing gear. I saw a bag that had spices in it. Opening it I spotted the coffee and tea there. Wow that was so good.  Launching the canoe, slowly paddling the shorelines we were soon casting our fishing lines towards shore. In the process we caught and released 30 to 40 Smallmouth Bass. Most were not of any size, but a pleasant diversion for the day. After a couple hours it was time to head to shore for lunch. There was not much wind and it was getting hot. Tim commented that the sun was getting to him and I was beginning to have a headache. Not to complicate things we headed back to camp. At the campsite I laid down in the tent for a nap while Tim went for a swim. When I woke up and met Tim at our chairs we both had cooled down. Tim spoke about how cold the water was and as he dove deeper it got colder.

Evening arrived and photographic wise you could not ask for better. The wind became calm, lighting became great, just an awesome time for a photographer. We set up among the islands to capture the compositions. The one above is one of the results. Finally the wind came back, but that was okay as it was becoming dark and time to head back to camp.