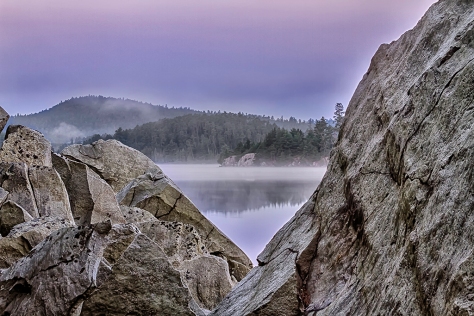 Having explored the campsite it was time to haul our gear into the campsite. Once the camp gear was in place it was time to sit back, relax and enjoy the grand view. A nice breeze was blowing off the lake. It being lunch time we proceeded to eat lunch. This was when I discovered that I had misplaced the tea and coffee. Tim’s Dad had been an ardent  woodsman and he taught Tim a lot about  the outdoors. One of the things was making tea from plant leaves. In this case he gathered up a bunch of blueberry leaves to put in with the boiling water plus raisins. It was not bad. Experiment and learn.

After stretching out in the tent for a half hour, we were soon on the lake exploring. Wolf lake is not a large lake. As we followed the shoreline enjoying the lake features I noticed that there was remains of trees that had burnt during previous forest fires. All the campsites had been taken. There are apparently four or five campsites on this lake. Approaching the outlet into Sylvester Lake we observed a large party at a campsite. Shooting through a narrow spot between the two lakes, the canoe glided onto Sylvester Lake. Looking around us, it was soon discovered that this lake had nothing to offer for photographing. Paddling back into Wolf Lake we followed the West shoreline to the upper end of Wolf Lake. Turning the canoe back to the campsite, returning in time for supper.

With our meal out of the way it was a matter of waiting for evening to descend upon us. As we sat in our chairs, Tim spotted a Loon across the lake with its one young chick.

I explored the shoreline near camp. There appears to be a very healthy population of Smallmouth Bass in this lake. The lake looks very healthy. There are an abundance of crayfish among the rocks. Crayfish are a favorite of the Smallmouth Bass. We managed to get some photographing that evening. Evening soon turned to darkness. Tim had a good fire going. The mosquitoes appeared. We spent a wonderful evening sitting by the fire under a canopy of stars. The moon was shining as a quarter moon.

When we woke up the next morning the lake was still with mist. I captured the above scene by using the boulders as my foreground and to direct your eye through the V. It helped to eliminate a lot of water from the scene. You can see a small ridge in the background along with what I believe is Wolf Mountain.

I will be posting more work of this trip in the future. I am heading up North of Sault Ste Marie to Lake Superior for a weeks photographing. So until next time happy trails.