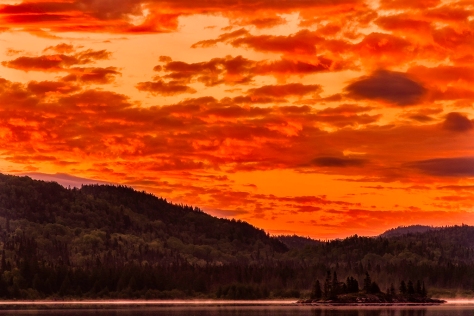 My last morning at Pukaskaw National Park I slept in by a half hour. Crawling out of my sleeping bag and grabbing my camera gear, I quickly headed towards Hattie Cove. I was greeted by a spectacular color display in the morning light. The sky and clouds were brilliantly colored. I setup my tripod and camera and captured the above scene. This type of view is ever changing. It is a matter of watching the changing lighting. It is a matter of taking a number of shots. You are looking for that optimal composition.

I proceeded to do some research on the subject and came up with theses facts. A red sky in the morning , sailor’s warning. Most times weather moves West to East, blown by the westerly trades wind. Meaning that storm systems generally move in from the West. The colorful sky that can be observed at dawn and dusk are caused by the sun’s rays been split into the colors of the spectrum as they pass through the atmosphere and bounce off the water vapor and particles in the atmosphere.

I will be up at Pukaskaw National Park next week for a week of photographing. So until next time happy trails