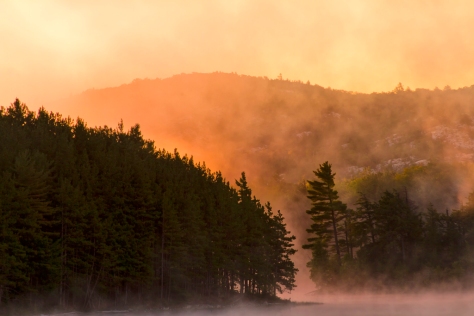 By now the light rays were peeking through the fog at the East end of Boundry Lake.The lake narrowed at this end of the lake before opening into a bay.The light rays filtered through this opening to create the effect that you see in the photo.In reality it is being in the right place at the right time.

Meanwhile Maureen was preparing breakfast as I was doing my photographing.Once the wind picked up and the fog dissapated it was time for a hot coffee.I bent down to retrieve my glasses off my camera bag only to discouver that the lense were completely frosted.It was colder than I thought.

With breakfast finished we repacked everything.It was time to head out.Maureen and I backpacked our gear over to David Lake and loaded the canoe for the trip down David Lake to the next portage.Upon nearing the portage we met a couple from Switzerland.They were here for a weeks canoeing in the Park.It is always nice to meet people in your trips and be able to discuss your adventures with them.We had an enjoyable chat with these folks through the portages.At the end of the last portage into Bell Lake a group landed at the portage.They were on a Father,Daughter weekend.

As we paddled up Bell Lake a squirrel swam across the lake in front of us.This was a first for me.We reached the landing in short order and another trip in the books.Maureen suggested we head for Killarney for fish and chips.I never refuse fish from Herbies Fisheries.The fish and chips are the best.

That is the end of this trip so will be back with another one shortly.So until next time Happy Trails.

16 thoughts on “A foggy Morning”