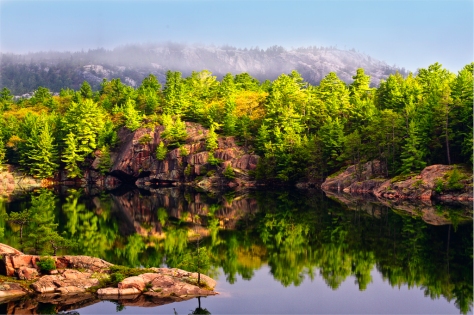 I woke up last Friday morning at 4:00 a.m. to a cloudy morning.It had rained that night.I loaded my photo gear and headed to Killarney Provincial Park.My destination was A.Y. Jackson Lake. The two previous trips had been unsuccessful.The road into Killarney was foggy at times and I had to slow down once for a deer crossing the road.I pulled into the parking lot on George Lake and before me were mirror images on the lake.I knew I had the possibility of some good shooting.I prayed that the wind would hold off.I quickly loaded my gear and hiked into Jackson Lake,being careful of slippery rocks.

I have to tell to that upon arrival at Jackson Lake I was treated to a spectacle that every photographer wants to see.My goal had been to get a panoramic on this lake.Well I will tell you it was before my eyes.We will discuss this later.There was fog on the La Cloche Mountains and later that morning the sun came out off and on.The above photo is a result of sun coming out and lighting up certain areas.It was a matter of watching and being ready.For the above photo I set the zoom at 44 mm  and the shutter speed was set to 1/4 sec @22

The highlight of the morning was being able to finally get a panoramic of Jackson Lake with the La Cloche Mountains in the background.The fog in the mountains really made this photo along with the wonderful lighting.

I proceed to capture a number of great shots this morning and by 9:00 a.m. the shooting was over as the wind finally picked up.I was tired but happy with a card full of great shots.You have to make many trips into these areas to get the shots you want and persistence does pay off. The Pano is below for your viewing.Be sure to click on the photo to see it fully.I am off on a two day trip into Killarney Provincial.So until next time happy trails

4 thoughts on “Finally The Pay Off”