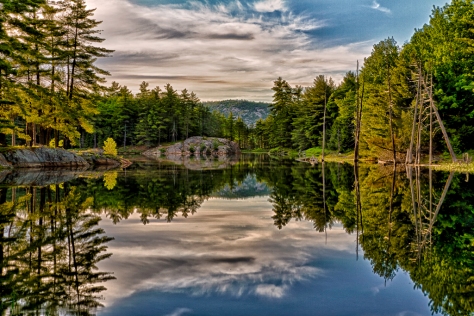 Paul Smith and I headed back down to Killarney Provincial Park on the past Monday.It was mid morning with clear sunny skies.The wind was light.After receiving our camp permits we loaded the canoe and launched into George Lake.One thing that we noticed was that the fire danger was set at low.

Reaching the East end of George Lake,we made a quick haul over to Freeman Lake.It was an uneventful trip to the Killarney Lake Portage.There were a few mosquitoes on the trail,but nothing serious.It is always a joy to canoe Killarney Lake with its clear turquoise colored  waters.As we paddled through the channel we spotted a female Common Merganser on a log, head tucked under a wing sound asleep.Our presence did not even disturb her.

Paul and I decided to set up camp at the first campsite on Killarney Lake.Quickly setting up camp, we soon were relaxing in our camp chairs.It is always a pleasure to just sit back to enjoy the beauty of what nature has to offer.

It was not long before I had a package of Uncle Ben’s rice cooking on the propane stove.I added cooked chicken breast pieces to give it body.This makes for a nice meal.I set up to make us a pot of tea and guess what.I had left the coffee and tea at home.Oh well we survived quite well without the caffeine.

The lake was calming down quite noticeable as even approached.We gathered our camera gear  and paddled back down to the portage.The first thing we noticed along the portage shoreline were large a large set of moose tracks that were not there when we first hauled over that afternoon.The above photo was the result of that evening of photographing.You can notice beautiful back lighting on the trees on the point to the left of the photo.I included  the deadheads standing to the right to add more interest to the composition.The reflections lead you into the center of the photo.

Paul and I returned to camp knowing that we had captured a pretty decent photo.We had always passed through this area at the wrong time of day on our way to other lakes in the Park.

The next evening was not so successful  as the wind never calmed down.As we sat by the shore we watched a Trumpeter Swan circle in front of us.A male Common Merganser went flying by us with two female Common Mergansers in pursuit just above the lake’s surface.A Black Cormorant landed on the far shore. Flocks of Canada Geese flew overhead.The Common Loon pair were always present drifting in front of us.Then towards dusk a Blue Huron passed by heading to its roost. A busy evening for bird life on the water.

We woke up at daybreak but there was to be no photographing.Packing up our gear we were soon on the water heading for home.The wind was light so we made good time.As we approached the George Lake portage a pair of Common Loons were spotted near the shore on Freeman Lake.Quietly paddling we were able to get within 15 feet and I let the canoe drift as the Loons followed the shoreline .Paul did the photographing and I kept the canoe on course.This went on for a good 10 minutes before the Loons dived and were soon too far ahead of us.In short order we reached the beach on George Lake.Loaded everything into my Explorer and another great trip in the bag.

Well that is it for this week so until next time happy trails.