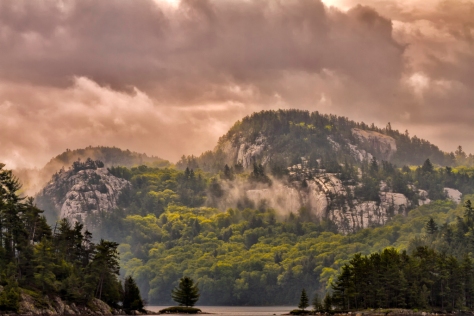 I awoke one rainy morning to the sound of rain drumming on the tent fly.Peering out the tent door I could see fog on the La Cloche Mountains,the wind was picking up and there was a chop on the surface of O S A Lake.Emerging from the tent I ducked into the tarp we had set up for days like this.Soon I had a hot coffee brewing and along with a bagel had breakfast.It was now just a matter of waiting.

By mid morning the rain had quit and the wind was not as strong.The hills had some nice mist and there was stiil  stormy clouds on the horizon.I set up for the above composition to capture the moment.There was a large expanse of water in front of me that I did not want to show.Using the narrows as the foreground,thus eliminating unnecessary water I took a series of shots.I liked the fact that the foreground was dark which gives contrast to the over all mood and adds to the depth.It was also a matter of watching the mist moving through the hills and waiting for the right amount.

By noon it cleared up.It became another beautiful day on O S A Lake.Well that is it.Until next time happy trails.

5 thoughts on “When The Rains End”