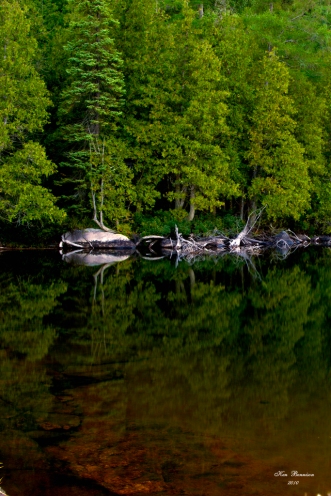 Late afternoon last Thursday Paul Smith and I head up to the 42 mile mark on the Aux Sauble River North of Massey.This location has a good set of rapids which are not of much interest in photographing.The river above the rapids is quite interesting with good photographing opportunities.

We had been here the week before when there was an overcast sky and the air was heavy with moisture.As a matter fact there was a fine mist in the air that you could not see,but the mist showed up in the photos.I had a lot of unsharp photos,especially with the rocks.

This time around the problem was that we had shadow to the left and right of us and brightly lit shoreline ahead of us.There was a touch of wind that did not stop completely.Another problem we ran into was that the fish were jumping at a tiny white mayfly that probably measured about a 1/8 inch. I had seen one fly by  me close up so I was able to identify  it as a mayfly hatch.You would press the shutter and a fish would jump creating ripples in the water.

I walked out to a rock above the rapids in my chest waders  and noticed some reddish colored rocks in front of me.Looking at the far shore line I saw rocks and deadheads reflecting in the water.By combining the reddish rocks for foreground and the far shore for depth I created an  interesting composition.I set my zoom lense at 44mm and the shutter speed at 4 sec and the f stops at f25.

Once we lost our lightning we packed up and headed back down the road.We decided to take the crossover road that connects the Tote Road to the Westbranch Road North of Webbwood. This road is used by loggers to get in to the area to cut trees and haul the logs to the sawmill.Paul and I were driving along when we drove down a small hill and before us was a swampy area with blackish water by the road.What caught our eye was a group of deadheads on the far side with reddish orange grass behind them.The water was dead calm and the lighting was gorgeous.We parked the truck and proceeded to photograph and low and behold we again had problems with fish jumping. 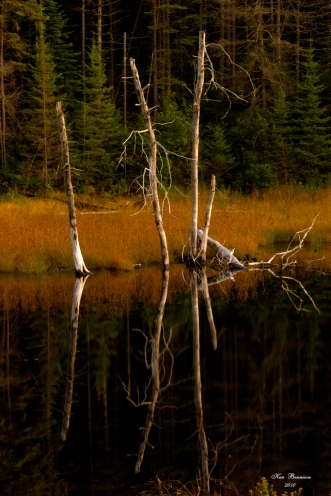 The above photo was one of the compositions that I came up with.Shot with a zoom setting of 65 mm and a shutter speed of 3.2 sec @ f22.One of the things that I had to watch out for was there was a lot of gray in the background that would not look good.The lightning lasted about a half an hour,before we headed home.