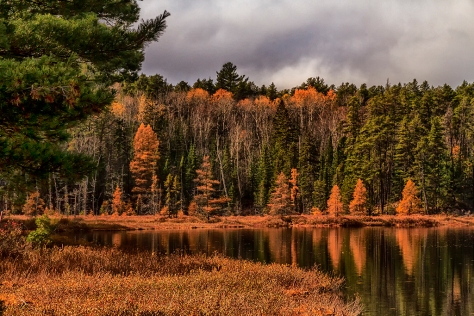 The fall colors of the maple and oak are almost gone now. Standing out in contrast with the green of the pines and spruce, the tamarack displays its beauty. The tamarack is also known as larch.

The Algonquian people named this tree tamarack. The meaning, wood used for snowshoes. Its habitat is low lying areas such as swamps,and bogs. The larch is deciduous and the needles turn yellow in autumn.

I photographed this scene in the late afternoon. Sunlight was filtering through the clouds. The side lighting intensified the yellow color of the tamarack. The backdrop of the green spruce helped to allow the tamarack to stand out in the photo.

One thought on “Tamarack”